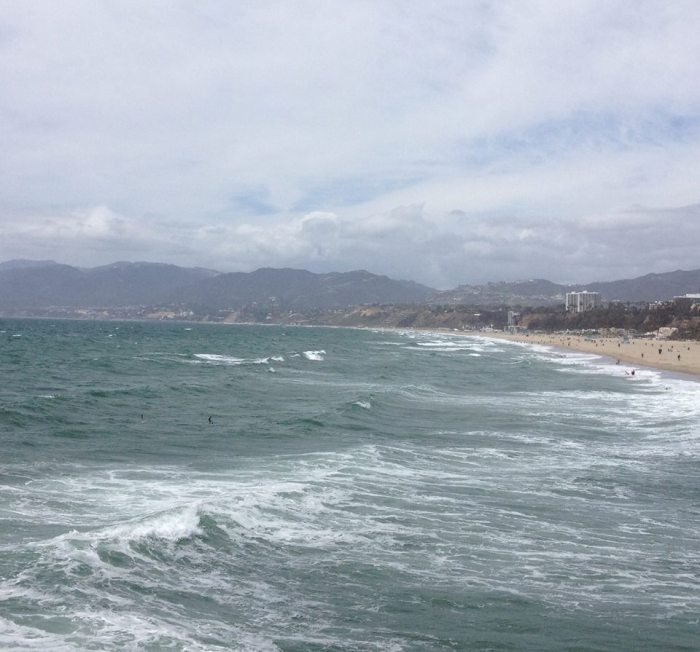 I don’t recall being taught to ride the waves.  I was tossed in.  Sink or Swim.  Learned to kick my legs to keep my head above water.  Learned to not panic if I swallowed water. Learned to tread water when I was too terrified to move forward.  Taught myself the back float, so I could leave my body and hover serenely in the clouds.  It’s a long way from tide pools and riptides, from churning waves and undertow,  to the soft, calm beach of Malibu.

Santa Fe and Questa were background work for my trip to Los Angeles.  Three months of New Mexico winter, of the push-pull between complete isolation and the community of small towns and old friends.  Los Angeles began with reconnecting to a friend and family I knew well 30 years ago in the early 1980s, when I lived and worked and dreamed in West Los Angeles.  Where I counted money at Crocker Bank with Niloofar.  Where I partied at Club Lingerie with Shabnam, danced in mosh pits at the Hollywood Paladium swallowing little black pills strangers passed around (Don’t try this at home, kids).  Where I ended up mugged several times with my “friend” Kerry.

Whenever I looked back at those years in LA, I felt I wasn’t capable of taking care of myself.  But returning to Los Angeles, I learned that I can, I have, and I do properly protect myself and I have for years.  Armed with that knowledge, I burst on the city with full enthusiasm.  In the process, I reclaimed myself.  I took buses all over town.  To Santa Monica, to Beverly Hills, to West Hollywood, and downtown.  I was inspired by every neighborhood I walked through.  By Sunset Blvd at night and Malibu by day.  By old friends who had changed and remained the same in similar ways that I had. (Of course, I’m still me, which means I lost my wallet my final day in town…but the Universe was kind and a wonderful man from Virginia returned it, with everything intact.)

At the main event, AWP writing conference, I forced myself to attend workshops and sessions that I normally might avoid.   Workshops on short non-fiction; on magazine writing; and on website writing for venues of interest to a variety of readers.  In addition, I learned that my memoir can be accepted by an agent without being completely finished and polished.  Creative non-fiction can sell with a few strong chapters, a solid synopsis, and an annotated Table of Contents.  NO MORE WAITING FOR PERFECTION!!!!

And so, like the distant mountains and beaches of Malibu, I arrive one arm stroke at a time.  My steps now are clear; they were laid out in front of me by the wisdom of published writers and agents.  All I need to do is stay present in inspiration, keep my head above the waves,  and trust that the water will carry me along: one image, one page, one query letter at a time.

One thought on “Take the Long View”